Amaiden asleep in her canopy bed.

Elmiryn reached out and touched her cheek.  Cold beneath the fingers.  Skin, once smooth like a babe’s, now sticky and rubbery as if a thin layer of mucus covered her.  How could thought reside here?  How could life reside here?  The warrior smelled almonds and rotting wood.   Her eyes strained vainly to see more than fine white lines in a canvas of black, the definitions feeble and shifting as she leaned in closer.

“What are you doing here?  Cursed child, you aren’t supposed to be here!”

Her father’s voice.  She turned in the direction she heard him from, and saw a vague outline of a man.  Elmiryn blinked and opened her eyes wide.  Her head hurt from trying to see him fully. “Father?”

The man came towards her menacingly.

Startled, the woman stepped backward with hands before her.  “Now wait a minute, I–” Her words were cut short as her foot fell through air.  Her body careened backward into a dark pit, where she lost all sense of self.

Elmiryn awoke with a small shout, her body shooting upright as she stretched out a hand.  Confusion flashed quick over her face, and she gazed at her own arm before letting it fall against her again.  She glanced over at her companion.  Nyx was still asleep.

“Nightmare,” Elmiryn muttered to herself.  She let her eyes glaze over as she unbraided her hair, the motions of her fingers somehow comforting in a way.  When she finished, she stood from the bed and left the room.

The inn keeper was up, already preparing for the day.  She took a moment to prepare the bath for the warrior and Elmiryn tried to relax in the water.  Afterward she came back up to the room to find that Nyx was still asleep.  Elmiryn went to her bed and crossed her arms, her damp hair framing her face.  The youth was frowning, her hands clenching and unclenching, faint whimpers coming from the back of her throat.

Elmiryn rubbed her eye in a brief show of exasperation.

“Nyx.” She shook the girl’s shoulder lightly. “Nyx. Wake up.”

A groan. Nyx shifted so that her face turned into the pillow, away from Elmiryn. “Mmmrph.”

Elmiryn rolled her eyes to the ceiling. “How is it that I’m awake before you are?”

“You’re right.” Nyx mumbled, turning her head enough to offer a sleepy glare. “You should correct this grievous mistake and get back into bed. You ought to be hung over worse than a opossum.”

“What does a opossum have to do with it?”

“Go back to sleep and I’ll tell you.”

Elmiryn’s shoulders shook with laughter as she tried to keep quiet. The battling suns had barely colored the sky with their blood and the streets were still delicate in quiet.  Elmiryn shook Nyx’s shoulder again. “Hey, c’mon.  Get up.  …Nyx, I will drag you out if I have to.”

Nyx whined and hid her head under the blanket. “You always come with the same threat!”

Elmiryn placed her hands on her hips and quirked an eyebrow. “Well! I didn’t know I was being judged on creativity!”

“Why do we have to get up so early every day? What’s the point?”

“I like to make the most of my days.”

Nyx poked her head out and glared squintily. “Aren’t you even a little ill from all that drinking you did!?”

The warrior feigned anger. “I was not that drunk. Sheesh.”

An irritated sigh. “Elle. You could barely walk in a straight line. That’s fairly inebriated in my book.”

“I could so walk in a straight line!” But Elmiryn grinned coyly and suddenly took an interest in the ends of her hair. “…I just…y’know…needed a running start.”

Nyx snorted into laughter, “That makes no sense whatsoever!” She looked back at the woman, her smile spreading so far that dimples appeared in her cheeks.

The warrior grinned triumphantly.  “HA! I made the morning grouch laugh!”

The shapeshifter growled and looked away.  After a moment, she looked back at Elmiryn in what appeared to be earnest. “Would you really drag me out of bed?” she asked quietly.

Elmiryn paused and locked eyes with Nyx.  She leaned down and planted one hand next to the girl’s head. “Would you like me to do something else instead?” she breathed.

Nyx kicked the blankets off and scooted upright, the sleep leaving her eyes almost instantaneously.  Elmiryn jerked back to keep from knocking heads together.

“Fine. I’m up,” the girl said stiffly.  Her cheeks were red again.

Elmiryn stepped away and began to braid her hair.  She didn’t lift her gaze. “I suggest you take advantage of the bath. I took the liberty of heating up some water for you.”

“Is it one of those public baths?”

Nyx shook her head, looking away. “No. I’ll bathe elsewhere.”

Elmiryn gazed at her critically. “Where? We aren’t near the stream anymore and there isn’t going to be a spring up in those mountains.”

“I don’t want anyone…to see…” Nyx pointed weakly at her back.

The warrior shrugged. “I’ll keep watch. Meanwhile, I’ll fix that hole in your collar.  Like I promised.”

When they entered the trail that led through the mountain range, Nyx had still refused to lift her gaze from her newfound book, and Elmiryn was becoming bored.  The warrior looked at the younger girl out of the corner of her eye.  “Where did you get that book?” she asked eventually, voice a little flat as she regarded the item like a dog who had sat in her favorite chair.

Nyx glanced at her, then looked back at the book.  “Some man gave it to me in Dame.  It’s like a collection of writings.”

“A man?  Do you normally accept gifts from strangers?”

The girl was quick with her riposte.  “Do I normally go journeying with warriors who shoot holes into people’s clothes?”

Elmiryn did a light face-palm as a chuckle bubbled up her throat.  “Oh fuck me.  It’s been, what?  Three days?  I’ve already apologized AND mended the hole.  But you’ll never let me live that down, will you?”

Nyx gave her a hard look.

The warrior crossed her arms and gazed back at her with a smirk.  “What did I do now?”

“Nothing.” The girl looked away, her lips thin.

“No.  Clearly I did something…again. So tell me, what did I do?”

The Ailuran sniffed delicately and turned the page of her book.  Elmiryn marveled at the fact that she had been able to read all this time and not trip or stumble once.  It was enticing in a way.  The girl could keep herself ordered and moving despite a shifting environment.  She tucked this observation away for later use.

“I don’t like foul language,” the girl mumbled finally.

“Well of course I have.  …When it was appropriate.”

This made the woman laugh outright.  “When is cursing ever appropriate!?”

“When someone behaves like an ass hat, Elle!” Nyx snapped, glaring at Elmiryn pointedly.

Elmiryn held up her hands a light smile playing on her lips.  “Okay, okay.  I know how grumpy you people get in the morning.  I’ll leave you to your reading.”

The girl gave her an incendiary look, her arms falling so that the book slapped against the top of her thighs.  “What do you mean…’you people’?”

The warrior looked back at her, unconcerned.  “Ailurans.  Your kind tend to sleep in.”

Elmiryn shrugged.  “Now who said that?  It’s common knowledge that most cats are nocturnal creatures.  There isn’t anything wrong with that.  If an Ailuran was working all through the night, then I say, LET him sleep in!  He’s earned it!” 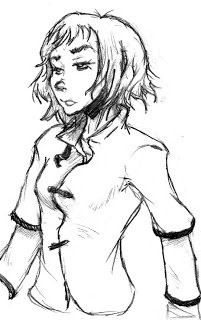 The girl sighed and rolled her eyes skyward.  “‘Insinuate.’  To subtly suggest something.”

The girl brandished the book at the woman.  “Well I want you to admit it!”

Elmiryn was unmoved.  “But you just said I did it!  Why would I have to fess up to something already pointed out?”

“I was only accusing you, alright?  It was not a statement of fact.”

Nyx grit her teeth and her grip on her book visibly tightened.  “Did you or did you not insinuate that I was lazy?”

Elmiryn placed a hand daintily on her chest.  “…But if I fessed up to that, it would ruin it!  Like a good joke!”

The warrior snickered.  “Not to you it isn’t.”

Nyx hissed in the back of her throat, and her shoulders and back tensed like a feline puffing up.  Then, suddenly, she took a deep breath and walked a little faster than Elmiryn.  This was amusing to the warrior as the girl had shorter legs, so her quickened pace looked more like she were trying to restrain herself from running.

“I know what you’re doing, Elmiryn,” The girl said primly over her shoulder.

“Not even a small curse?  Can’t you call me a cunt?  Or a cream-basted sow?  What about a shit-faced ninny?”

Nyx turned the page she was looking at in her book, her ears red.  Elmiryn was certain she hadn’t finished reading it.

Aware that her game was over, the warrior’s gaze trailed from her companion to their surroundings, where the climbing path led them through large collections of rocky crevices, around dusty boulders, and past defiant juniper trees.  It was past one of these old marvels that Elmiryn’s eyes lit onto an irregularity.

One of the small branches of a low, but aged juniper was snapped off, the branch nowhere to be found.  The exposed wood was still bright and damp.  Elmiryn slowed her steps to gaze past the juniper to the narrow space beyond it.  The place was dark in morning shadow, and no strange sounds came forth.  After a moment, the warrior continued walking.  Perhaps it had only been an animal?

Nyx glanced back at her, only now aware that Elmiryn had slowed down.  “Something the matter?” she asked, her voice still somewhat tight.

“Not really.” The woman looked up to see her companion gazing at her with sudden worry.  She smiled at the girl and walked past her.  “There’s nothing to worry about, Nyx.”

The shapeshifter trailed after her, and the warrior could feel her eyes on her back.  She looked back, and with no real plan in her head, she asked quietly.  “Nyx.  You aren’t afraid of me, right?”

Nyx blinked at the sudden question.  “Afraid of you?” she hugged her book to her chest, her tawny eyes turning away.  “I suppose…” she paused and brushed a strand of hair from her eyes.  “In a way, I guess I’m getting used to you.  But you are intimidating at times,” then she added, timidly, “Alot of the time…”

“Can you trust that I’d keep you safe?” Elmiryn slowed her steps so that she walked at Nyx’s side.

That was when she grabbed Nyx by the nape of her neck and threw her roughly to the ground.

Get Up to Speed!