NOTE: All entries are relevant to the characters at the time of their introduction to avoid spoilers for later story arcs. 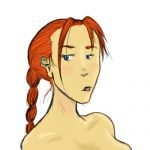 She is a warrior from the kingdom of Fiamma seeking revenge against the astral demon known as Meznik. The demon laid a strange curse on Elmiryn that affects her ability to believe in all images and ascertain their meaning, even for things she was once familiar with. This has deteriorated her ability to reason, her memories, and her sense of connection to the world.

By chance, Elmiryn came across Nyx when the Ailuran was in serious trouble. She rescued her and offered protection in exchange for Nyx’s company.

She is an Ailuran, a feline shapeshifter that was exiled from her people. After a long year of struggling to survive alone, Nyx was saved from an angry mob of farmers by Elmiryn. What started as a decision to repay that debt has become a deep and complicated relationship, one further confused by an unexpected path to redemption from a troubled past.

Though she loathes violence, Nyx has found herself forced to actively utilize her strength in ways she hadn’t before. With every dangerous struggle, she is becoming stronger and more decisive.

Residing deep within Nyx is… Her. The Beast. The animal counterpart. This separate entity thinks and feels almost entirely independent of Nyx, making her existence markedly different from something like schizophrenia. The Beast watches Nyx’s life from within the shadows of their shared mind, spitefully waiting for any chance to take control. 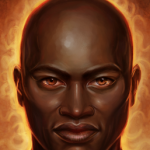 He is a quiet Fanaean man with brooding eyes. He is devoted to his wife, Quincy, and trusts deeply in her shrewd ambition, often following her lead… But to say that he does not think for himself would be a grave mistake. When Hakeem speaks, Quincy listens, and he is not beyond acting on his own when he feels it necessary.

A skilled wizard and an accomplished bounty hunter, Hakeem has many tricks up his sleeve. He also has an uncanny ability to keep track of time and is capable of doing great mathematical calculations in his head.

He first meets Nyx and Elmiryn in his pursuit of Lethia Artaud’s bounty. 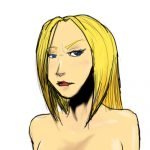 To many, she is a cold and distant woman of mysterious origin, and her lack of emotion is as bewildering as it is disturbing. Her husband, Hakeem, appears to be the only one who comprehends her, and for this, she treasures him… though even he seems to struggle with her strange nature.

A skilled wizard and accomplished bounty hunter, Quincy is a force to reckon with. Ironically enough, at the center of her dark enigmatic being is a persistent relationship with solar light.

She first meets Nyx and Elmiryn in her pursuit of Lethia Artaud’s bounty.

Tobias: Not much is known about Tobias aside from the stories contained in his book. Nyx recieved the book from him during a chance meeting in Toah. In it are his thoughts, as well as handwritten stories of three Legends–Earth, Wind, and Flame.

Flame : A character in Tobias’ tales. Flame is a passionate woman who is at times overtaken by prejudice and anger, but is not without her warm compassionate side. She is impatient, and prefers straightforward action to trickery and mind games. She hails from the Indabe continent, specifically the kingdom of the sands. She often bickers with Earth, irritated by what she percieves as stubborness and slow wittedness. Her weapons of choice are twin sabers.

Wind: A character in Tobias’ tales. Wind loves travel, adventure, and women. His exact origins are hidden. At his best, his breezy attitude is enough to cool Flame’s anger and lighten Earth’s melancholy, yet at times his nature can stir Flame’s ire and make a stubborn old man of Earth. He is restless, and cannot cease to move. At one point, he left his companions behind when they felt they needed a rest from their adventures, even going so far as to leave Earth to care for his only daughter. His weapon of choice is a long sword.

Earth: A character in Tobias’ tale. Earth is a quiet, contemplative man. He is patient, observant, and steadfast in his ideals. Between his mercurial companions, he serves as the anchor of the trio, and ends bickering with a firm deep voice. He has an incredible sense of responsibility and honor, and works hard to protect things he loves. It is never said where he comes from. His weapon of choice is a heavy wooden staff.

Lethia Artaud: A young enchantress with wavy wheat blonde hair, bright green eyes, and a strong sense of loyalty. She is barely fifteen years old, yet she’s extremely intelligent and has a strong opinion of right and wrong. She loathes being underestimated, misinterpreted, or disregarded and has no reservations in showing someone the error of their ways, even standing up to Elmiryn more than once when the woman’s teasing and criticism crossed a line. On other matters where she’s less certain, however, Lethia can be reduced to a great deal of uncertainty and fear. Sometimes she feels the need to offer up information, unsolicited–though she isn’t trying to show off. This is likely due to her unfortunate handicap–her inherent power blocks out portions of her memory at all times. The power always shifts, and while it typically has been spread out through her mind, it has been known to collect together, blocking out large chunks of Lethia’s memory–such as her childhood, how to talk, or even something as simple as how to breathe. This power also seems to go on to affect her eyesight, preventing her from making direct eye contact with others lest she steal their thoughts and memories. To prevent this, she wore special glasses that shaded her gaze.

Argos: Lethia’s loyal dog. He is extremely protective of her, and holds her in the highest regard. He is massive, the size of an adolescent black bear, and sometimes seems to forget just how large he is. The reason for his size has yet to be explained, but he uses it to his advantage as Lethia’s personal bodyguard. Argos’, being Lethia’s chosen familiar, is much more intelligent than an average dog, and can communicate with his owner through telepathy. Though he thinks in pictures, he still understands things spoken to him. When attempting to speak with anyone besides Lethia, he uses body language to the best of his ability.

Paulo Moretti: The youngest of the Moretti brothers. He is rude, though he lacks malice, and he can be superficial. He can be melodramatic and lose sight of everyone’s problems but his own, and his open mindedness could use with improvement–but the fifteen year old means well, and will fess up to faults once someone gets through to him. Paulo has been bounty hunting for only a short time–less than a year–but was an eager learner and a confident fighter. In pursuing Lethia Artaud, however, he has come to suffer under some sort of spiritual poisoning that causes him to lose time and have terrible nightmares…all of which involve images of a malignant tree and a haunting song. His ailment also seems to bring him a sort of constant bodily pain, like multiple sclerosis. Additionally, his eyes, from time to time, blur out his surroundings, leaving only a certain direction free and clear. It didn’t take much for Paulo to realize that this “forced vision” was directing him back to where his spiritual poisoning first began–Syria’s tower.

Graziano Moretti: The second oldest of the Moretti brothers, and the most optimistic. Upon meeting Elmiryn and Nyx, he was goofy and charming. He was a womanizer, but sensitive at heart, and extremely clever. He knew many things about magic, though he wasn’t a magic user himself, and he cared very much for his family. Often, Graziano disagreed with Arduino when it came to Paulo.

Arduino Moretti: The oldest of the Moretti Brothers. Is very serious and horribly protective over the welfare of his two other siblings. He feels responsible for them, and though discouraged by the way the bounty hunting life has become filled with magic, he is determined to do right by his family.